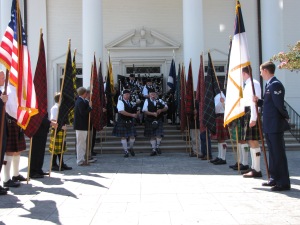 First Presbyterian Church of Greenwood will celebrate the annual Kirkin’ o’ the Tartans service Sunday, October 30,2016 at 11 am.  Palmetto Pipes and Drums of Columbia, SC will once again provide the bagpipes and drums for the Kirkin’ service.  Lemonade and shortbread will be served on the lawn following the service. Be sure to wear your own family tartan and enjoy the music of Scotland!

Bagpipes and drums will play as the Beadle ( layperson assistant to minister in Church of Scotland), Ken Orcutt, carries the Bible into the sanctuary followed by the Claymore sword, the American flag, the Christian flag, the flag of Scotland and the St. Andrew flag

. Fred Malone, retired Naval officer, will present the US Navy flag followed by family tartan flags.  It is a beautiful service reminding us of our freedoms as Americans and our families’ many blessings.

The service is rooted in the 1716 Disarming Act and 1746 Act of Proscription that forbade Scottish Highlanders from wearing weapons or tartans (plaid), speaking Gaelic, playing bagpipes, and dancing. In the years that the English government strictly enforced the ban, Highlanders would touch the hidden cloth during their church service (kirk is the Scottish word for church) when the minister gave the benediction, thus rededicating themselves to God and their families.

The Reverend Peter Marshall, Chaplain to the U. S. Senate during World War II, is credited with the first American Kirkin’ of the Tartan service in 1947 at the New York Avenue Presbyterian Church in Washington, D. C. He wanted to encourage the large population of Scottish-Americans to unite with their homeland, Great Britain, in the war effort. Today, “flashes” are a piece of tartan worn around the traditional Scottish dress hose, and some also wear a sgian-dubh (SKEAN-dhu) to commemorate this time in history. The Claymore sword is also a reminder of the many who wielded the “great sword” to protect their clans. St. Andrew, apostle of Jesus, is the patron saint of Scotland. And of course, there will be tartan kilts and banners representing our families! You can wear your family tartan or the clan tartan of which you would like to belong!

The service ends with the clan tartans recessing to “Amazing Grace” played on the bagpipes followed by a short concert of band favorites on the lawn, weather permitting. 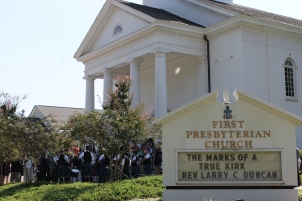